Solenoid valves incorporate the use of coils and metal cores to regulate the flow of liquids and gases. They are electrically controlled devices that require either AC or DC energy to power the coils, which then convert the electrical energy into linear motion.

At the core of the valve is a solenoid, and it consists of two main parts: a helical coil made of copper and a movable ferromagnetic core. The core is also called the plunger or armature, and the coil wraps around it to form a cylinder.

In the resting position, the plunger extends outside the coil, and spring tension keeps it out. When you power the solenoid, electricity flows through the coil to create an electromagnet. Regardless of the current polarity, the magnet attracts the armature to the center of the coil. When this happens, it opens a port in the valve to allow media to pass through.

Switching off the power halts the electromagnet, which releases the plunger. The spring takes over and pushes it back to its resting position, which closes the valve port.

For the system to work, the magnetic force generated by the coil must be greater than the spring’s force, the friction of moving the armature from the port, and the media’s hydraulic pressure combined.

Switching power on/off to the coil causes the conversion of electrical energy into mechanical/linear energy by raising or lowering the plunger.

While there are many mechanical variations of the device used in car starters, latches, solenoid valves, switches, etc., the basic design (electromagnet) is the same.

Differences Between AC and DC Solenoid

Despite having a similar design, there are two types of solenoids. These are AC and DC solenoids, and they take their name from the type of current they use.

For the DC type, the working principle is straightforward. When the coil gets energized, it creates a magnetic force that pulls the armature to open the valve port. When you cut off the power supply, the coil is de-energized, and the spring pushes the armature back to close the valve. 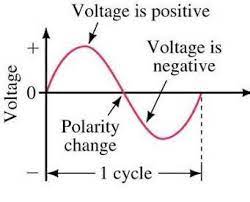 If you plot it on a map, there are two periods when the current will be at zero per cycle so that the coil will be energized and de-energized continuously. Therefore, the magnetization will be on/off, and the spring will push the plunger out when it is off.

The result is intense vibrations, which create a lot of stress and overheat the coil to the point of burning out.

How AC Solenoids Solve the Issue of Vibrations

AC solenoid valves incorporate the use of copper shading rings fixed right above/around the plunger. The shading ring stores some magnetic energy to help overcome the spring’s force when the electromagnetic field goes towards zero.

Compared to the sinusoidal wave created by the coil, the shading releases its stored magnetic field energy 90 degrees out of phase. Therefore as the coil’s field dips towards zero, the ring’s field peaks to fill the void.

If you plot the magnetic fields of the two together, it will never hit zero. So long as the coil has energy, this field will be enough to overcome the spring force, and this will eliminate the occurrence of vibrations.

The problem with the shading ring is that it may be ineffective if the area around the plunger fills with dirt and debris. One of the improvements would be to use a full-wave rectifier to convert AC to DC because it harnesses both cycles of the AC.

However, this effectively means the solenoid valve must be a DC type because, whether the rectifier circuitry is internal or external, it converts the energy before it gets to the coils. Thus, you might not get the full benefits of an AC solenoid.

Apart from the structural/design differences between the two types of solenoids, they have several performance variations in the following areas.

AC solenoids have an edge over their DC counterparts when it comes to power requirements. At the start, they consume high levels of energy to create strong peak currents in the coils to open the valve.

While it may seem like a disadvantage, this is necessary because the initial magnetic force on the plunger must be high enough to overcome hydraulic pressure from the media, friction, and spring tension.

After the valve is open, the current (and magnetic force) required to keep the armature in position is relatively low. AC solenoids behave exactly this way because the current drops after the valves open. Therefore, they deliver sufficient opening force, then use little energy afterward, which helps to save on power consumption.

The case is very different for a DC solenoid valve because their power consumption rises slowly from the start, resulting in a slow valve opening. After this, the devices consume a constant amount of current, which is more than the amount required to keep the valve ports open. Therefore, they waste vast amounts of energy as compared to the AC type.

However, their design can be improved using external circuits (such as having a capacitor and resistor in parallel). In such a case, charging the capacitor via the coil spikes the current, which provides enough power to open the valve quickly. On the other hand, the resistor limits the current that passes through to the coil once the capacitor is full.

That said, the setup still wastes energy because instead of ending up in the coil as excess, it ends up as heat on the resistor.

AC solenoids have some drawbacks too, and one of them is in the production of noise and vibrations. Even though their design includes shading rings, there is the risk of vibrations in case this component fails. If this happens, the solenoid will produce a buzzing noise, and it will damage the unit.

However, with the DC type, there is no risk of buzzing because the current does not change polarity.

Another major drawback of AC solenoids is that they generate eddy currents and magnetic hysteresis losses due to the induced EMF in the plunger. The two cause power losses, which reduces the efficiency of this solenoid. However, by changing the armature material from iron to silicon steel sheet, the losses are reduced, so this is a crucial design improvement.

DC solenoids do not produce eddy currents because the electricity always flows in one direction.

With AC, the operating time is not constant because it varies with the operation frequency, and it also affects the coil’s heat buildup.

The case is different with DC as the operating time is constant. Regardless of the frequency, it will remain the same because this current travels in one direction.

The service life of both solenoid types depends on the wear and tear (friction) between the plunger and the valve pipe/guide. AC solenoids might experience faster wear if they begin buzzing.

In a DC unit, the excitation current depends on the coil’s internal resistance and voltage, but it is constant regardless of the stroke. When energized, the coil pulls the plunger to open the valve, reducing the size of the air gap progressively. At the same time, it minimizes the magnetic resistance.

Here, the AC voltage and frequency determine the solenoid’s magnetic flux while the magnetic resistance changes before & after the closing processes because the air gap also changes.

Even though the solenoids differ due to the type of current they use, it is okay to use DC or AC for coils rated for AC and DC, respectively. However, there are some restrictions.

For instance, when using DC in an AC solenoid, you must limit the voltage and current to keep the coil from burning out. Coils in AC solenoids add up their inductive reactance with electrical resistivity, which means the impedance is much higher than in DC-rated coils. As such, the solenoid might burn out quickly if you do not limit voltage and current.

Say the AC coil has a rating of 36V; if you power it using 36V DC, there is a high possibility of burning the solenoid because the direct current at this voltage is higher than the alternating current at the same voltage.

That said, there is no formula for determining the recommended DC voltage for an AC coil, so one of the solutions is to use a current limiting resistor. Though it may increase power losses, this device will ensure the current is lower than the coil’s AC rating. You can also reduce the supply voltage instead.

On the other hand, powering a DC-rated coil using AC runs the risk of creating vibrations and buzzing because such solenoids do not have shading rings. Of course, this setup will damage the solenoid because the vibrations will overheat the coil while the plunger will experience intense wear and tear.

The only solution to this problem is to convert the AC to DC using a full-wave rectifier and a capacitive filter. However, the current from this external circuit will be quite low and will create a weak electromagnet. As such, the solenoid might not be able to open the valve.

You can solve this by raising the voltage of the AC so that more current gets converted into DC.

However, in the end it is always better to have a professional electrician work with you if you’re not familiar with adjusting currents. You can get a converter or, often, it is as easy as switching out a coil to the correct voltage and current. If you’re not sure, we would recommend giving a call to your local electrician or reaching out directly to your manufacturer.

Which One Is Better?

As you can see, each solenoid type has its advantages and disadvantages, so which is the best one. The answer to this depends on your intended use. Generally, DC solenoids are better because they do not run the risk of buzzing and overheating.

However, they are not as fast, so if the application requires a rapid valve opening response, it is better to use an AC solenoid.