Solenoid valves are electromechanical devices used to control the flow of fluids. They are widely used in HVAC, oil & gas, and automotive industries to control or mix fluids.

A solenoid valve consists of a coil that creates a magnetic field when an electric current is passed through it. The magnetic field creates a force (electromagnetic force) on the plunger to close or open the valve, depending on the valve's resting position (Normally Open or Normally Closed).

Based on their working principle, solenoid valves can be classified into three main types: direct-acting, indirect-acting, and semi-direct. In this resource article, we will discuss these three popular types of solenoid valves and their advantages and disadvantages so that you can make an informed decision to select the right one for your needs.

Direct-acting solenoid valves function by using a magnetic force to open and close an orifice, directly regulating the liquid flow. Because the maximum flow rate through a direct-acting valve is directly proportional to the orifice size, these valves are only used when small amounts of fluids need to be controlled. Due to their simpler working principle, these valves do not require a minimum pressure or pressure difference to function and hence can be used in applications from zero bar up to the valve’s maximum allowable operating pressure.

Direct acting SVs are often used for shut-off, dosing, filling, and ventilation applications. They are most suited for:

Depending on the size of the valve, a minimum pressure differential between 0.1 to 0.5 bar is usually required between the two ports (in an NC valve) to lift the diaphragm and allow fluid flow from the inlet port over to the outlet port.

There's also an extra chamber above the diaphragm inside these valves, which acts as an amplifier, thus allowing them to control larger flow rates more effectively over direct-acting solenoid valves.

Due to being operated based on pressure difference, these valves regulate flow in only one direction and are more suited for high flow rate applications such as irrigation systems. It is recommended that you install a one way check valve to prevent backflow from damaging these types of valves.

Indirect-acting SVs are most suited for applications where

The semi-direct solenoid valve has the qualities of a direct operated valve and an indirectly operated valve, implying that it can work with no pressure while also being able to handle high flow rate applications.

This type of valve is designed similarly to an indirectly operated solenoid valve and contains an upper chamber, lower chamber, and a flexible membrane separating the two. The only opening in the membrane lets fluid fill up the upper chamber so that pressure can be equalized.

The main distinction between semi-direct and indirectly operated solenoid valves is that, in the former, the solenoid plunger is attached to and directly controls the diaphragm position. In contrast, indirect-operated valves use a pilot to control fluid in the upper chamber.

An indirect-acting SV has a diaphragm that separates the inlet port area and creates an upper chamber. This chamber is connected to the inlet port through a pressure equalizer hole. When the valve is idle or at rest, fluid passes from the inlet port into the upper chamber through the pressure equalizer hole to equalize pressure between both chambers (P1). When the (NC) SV Coil is electrically charged, fluid moves through a tiny orifice created by plunger movement. The fluid flows from the high-pressure upper chamber to the low-pressure (P2) outlet port due to pressure differential (P2 < P1). This flow results in two actions:

The difference between Indirect acting and Semi-direct acting SVs is that, in the Semi-direct valve, the plunger is directly connected to the diaphragm. Hence, when the coil is energized, the diaphragm lift provides an amplified pressure difference (P1 - P3) to cause the fluid to flow from the upper chamber to the outlet port. However, in indirect-acting SVs, an initial pressure difference (P1 - P2) is required for flow; therefore, these valves are also called pilot-acting or pilot-controlled SVs.

By adjusting the power supply, you can also control how far the plunger is displaced. This displacement directly affects and controls the flow rate from the inlet to the outlet ports. Therefore, a high-pressure flow line can be efficiently managed by using a small solenoid valve--an advantage that direct-acting solenoid valves don't have. 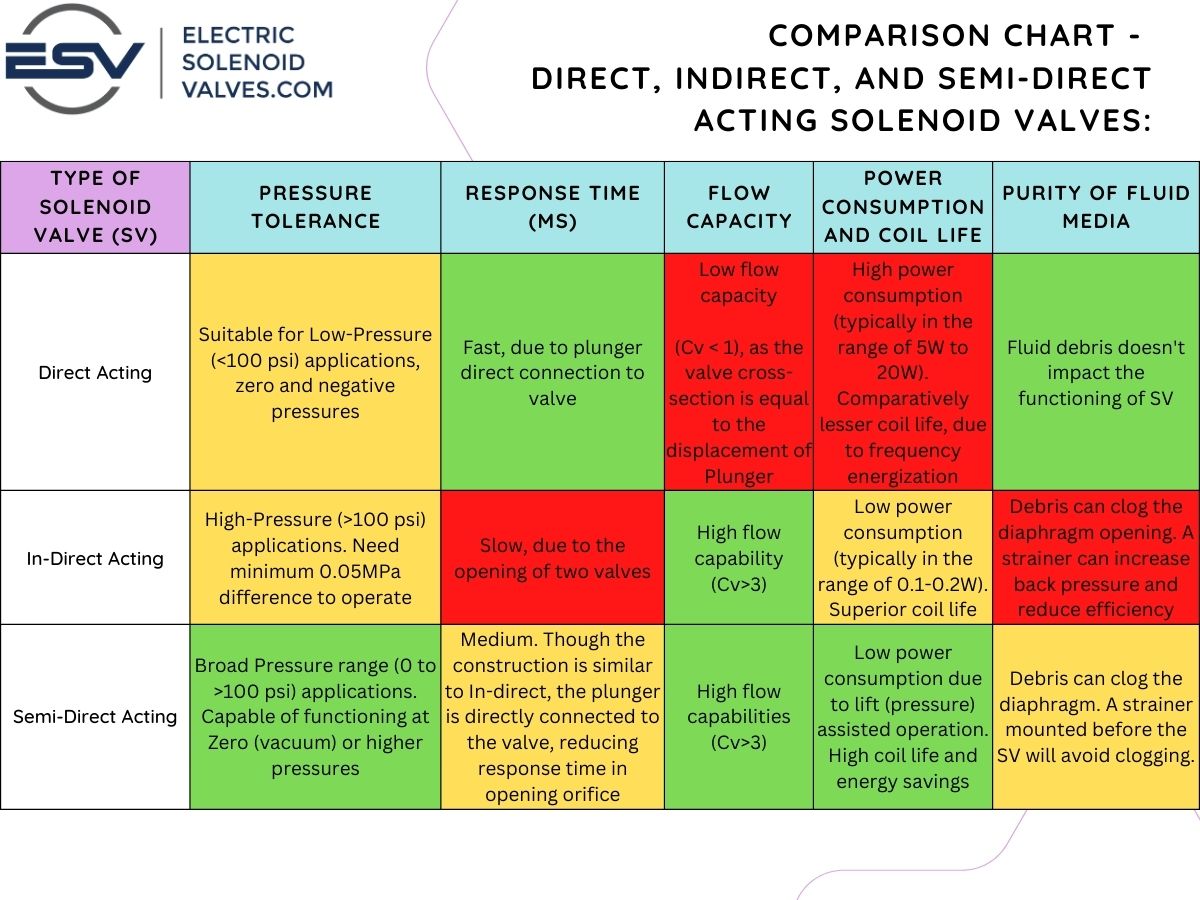 If you are interested in staying up-to-date on the latest smart automation products and technologies, check out our website or follow us on LinkedIn, where we regularly post news and reviews. We also offer a wide range of resources for gardeners of all experience levels, including tips, advice, and product recommendations.