When purchasing 3-way ball valves, you’ll come across several 3 way ball valve options such as body material, port size, and perhaps most importantly, flow paths/port types. Let’s take a look at some of the different types. 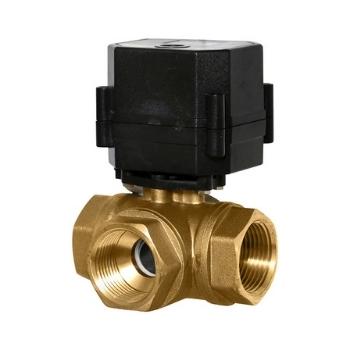 What is a 3-Way Ball Valve?

Before we get into different types, let’s talk about what a three-way valve is. A 3-way ball valve is a valve type with three ports, also known as openings. The connection between the ports has a metal ball with openings to control the media's flow direction.

Fluid or gas (media) flows through the valve, and there’s a mechanism to turn the ball, which directs flow from one place to another.

The 3-way valve is the most common type of multi-port ball valve. The ports are generally described as two outlet ports and one inlet, or vice versa, depending on the direction of the flow.

How Does a 3-Way Ball Valve Work?

Depending on the shape of the valve, fluid or gas will enter through different sources and either co-mingle or be cut off from each other.

The valve works by turning a handle (mechanical valves) or activating an actuator (electric ball valves), which rotates the ball inside of the body of the valve. The rotating action aligns the channels with the inlets and outlets of the valve to direct flow.

What Do You Need 3-Way Ball Valves For?

One of the best parts of a 3-way valve is its versatility. They can perform a lot of different functions. These include:

What are the Different Types of 3-Way Ball Valves?

There are two different types of 3-Way valves to manage different flow paths – L-port and T-port. The ball valve is manufactured in a specific design to create either the L or T shape. 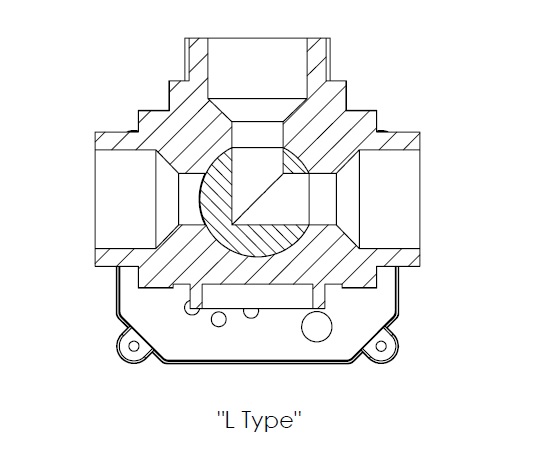 L-port 3-way valves are also called diverting valves. There are two openings in an L-port, appearing in 90-degree angles that combine in the middle.

Turning the handle on an L-port will divert media from one place to another. It can also be used to switch pumps that have a standard outlet.

When using an L-port valve, the port in the middle would be the common one. L-port valves direct flow 90 degrees or shut it off.

Common Uses for an L-Port Valve

A T-port valve can also send media from one place to another, but it can be moved so that the T lines up with the valve and all three ports get mixed.

Opposite flow direction is also possible, allowing one source to flow into two places at once.

T-port valves have a further use as well – they can be used to flow between only two ports, either through the left, right, or straight through.

Common Uses for a T-Port Valve

How Do You Know If You Need a T-Port or L-Port Valve?

The easiest way to tell what type of valve is needed is whether there’s a need to shut off all parts during an activity or mix three flows at once.

L-ports will allow for valves to be shut off. T-port should be used for mixing.

If there’s still a need to shut off all flows while using a T-port, an additional, separate valve needs to be added to the opposite branches.

The two valves need to be closed, and the ball needs to be turned to face the rear of the valve.

Deciding between T-port or L-port valves comes down to need. It’s not a situation where one is better than the other; they are simply different.

How are the Pipes and Ports Lined Up?

Deciding between whether to use a T-port or an L-port could simply come down to how piping lines up. Generally, a T-port can replace an L-port fairly quickly.

The arrangement will be different for a diverter service, and the center port is the common one. A T-port ball valve will use one of the side ports as the standard port.

What are the Valve Functions?

L-port ball valves are generally used as a diverter service. If the desired effect is maximum flow in one direction, an L-port’s construction means the flow has to turn a corner regardless of the valve position.

A T-port ball valve means you can have a forward flow in one direction and diverted flow in the other. Think about flowing water through spray heads.

Let’s say we’re connecting paint guns with a T-port ball valve. In position one, one paint gun could flow, but position two would allow for two paint guns at once, and all of the ports can be connected. This can’t be done with an L-port valve.

Whether to use manual or electric/motorized valves boils down to need. Does the application require constant fine-tuning or actions that must be manually handled by a person in the room?

They don’t even need to be operated in-house, although they can be if necessary. Many have remote operations from locations far away.